Currently, Microsoft supports a direct upgrade from Microsoft Dynamics NAV 2018 to .  But for those using an older version of Dynamics NAV, the upgrade path is not so direct.

The table below shows the paths to migrate from older versions of Dynamics NAV to Dynamics 365 BC (Business Central.) 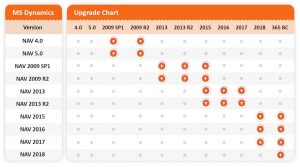 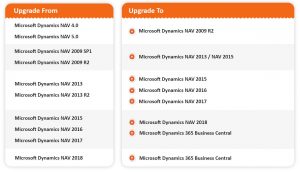 In helping our clients transition from Dynamics NAV to Dynamics 365 BC, we’ve identified some frequently asked questions. Perhaps our answers will be helpful to you.

What are the differences between Dynamics NAV and Dynamics 365 BC?

There are two primary differences between Dynamics NAV and Dynamics 365 BC. Though their functionality is basically the same, Dynamics 365 BC has the advantage of being browser-based. While still providing all the capability you are used to in Dynamics NAV (e.g., Sales and Service, Operation Management, etc.), Dynamics 365 Business Central will give you a wider reach and more flexibility. The second difference between the two has to do with licensing. NAV is licensed for concurrent users. Business Central is licensed based on Named Users. Both solutions can be deployed on-premises or in the Cloud.

The Cloud version of Dynamics 365 BC is best suited for small businesses with less complicated business processes. The costs associated with the Cloud solution are lower. The on-premises version of Dynamics 365 offers more complex features for business processes that require them and thus it costs more to operate. An advantage of Cloud deployment is that your data is available anytime, anywhere, and on any device, including mobile. To achieve that kind of availability with an on-premises system would require high-availability network hardware.

How difficult will it be to move data from Dynamics NAV to Dynamics 365 BC?

It won’t be difficult to move data from your Dynamics NAV to Dynamics 365 BC. It can be done using the Data Migration tools of Rapid Start Services, or it can be entered directly.

What out-of-the-box integrations come with Dynamics 365 BC?

How will my previous integrations work with a new Dynamics 365 BC deployment?

You can easily migrate previous integrations and customizations to Business Central from later versions of NAV, i.e.,  NAV 2017/2018. The older your version, the more difficult it is to migrate to either the Cloud or on-premises version of Dynamics 365 BC. To utilize your old customizations in Dynamics 365 BC, they would need to be made as extensions to be suitable for integration with the new deployment. In some cases,  old customization might not integrate because of incompatibility or because a similar functionality already exists in Business Central. You may find that with the increased functionality built into dynamics 365 BC, many of your previous customizations will no longer be necessary.

Does Dynamics 365 BC integrate with Office 365?

What are the Power BI capabilities of Dynamics 365 BC?

What does Dynamics 365 BC Cost?

Does Dynamics 365 BC allow concurrent users?

Microsoft has changed the licensing model from concurrent users to named users. Dynamics 365 BC (on-premises or on-cloud) is licensed per named users.

What are the licensing plans available for Dynamics 365 BC?

Microsoft offers several types of paid licenses such as:

Based on the licenses purchased, users are given certain entitlements or user permissions. As with Dynamics NAV, Dynamics 365 BC on-premises also has perpetual and subscription licensing with a monthly fee based on the number of users.

Is there a discount for existing users who wish to migrate to Dynamics 365 Business Central?

Through June 30, 2021, Microsoft is offering a 40% discount on Business Central licenses for any existing Microsoft Dynamics customer using the following:

At ,  our Microsoft-certified experts have extensive experience improving business outcomes for our clients. We offer end-to-end solutions involving ERP, Azure Cloud, Analytics, Artificial Intelligence, and IoT. We specialize in the  range of products.

to request a consultation.