What the Cloud Migration Tool Is

Microsoft has released the future roadmap for migrations from and to Business Central.

The Cloud Migration tool is a wizard that a system administrator can use to migrate Dynamics GP or Dynamics NAV to Business Central. Until the February update, the tool works with only Dynamics GP 2018 R2, Windows Server 2012, and SQL 2016, but those version requirements will relax come the new update. In addition, with future versions, there will be more connections added, but for now these are the primary two. It also requires Super user rights in order to activate.

Once all necessary requirements are fulfilled, the tool can create a connection between Business Central and another system to bring in data to Business Central. This can then be a permanent connection between the systems to bring in additional data later, to connect the two systems if a user wanted to try out a trial version of Business Central, or if a user wants to connect their old on-premises accounting system to the cloud. The wizard allows an administrator to select companies, databases, and data that are to be brought over into Business Central. It also allows an administrator to set how frequently this data comes across so that the databases can be fully up to date.

After the migration connection is setup, an administrator can also run the migration from inside Business Central whenever they choose. All of this is done through secured and masked connections that Microsoft establishes. Essentially, it’s a useful tool for anyone considering making the switch to Business Central since it guarantees high fidelity, secure transfer between systems so that no data gets stuck in the pipeline. 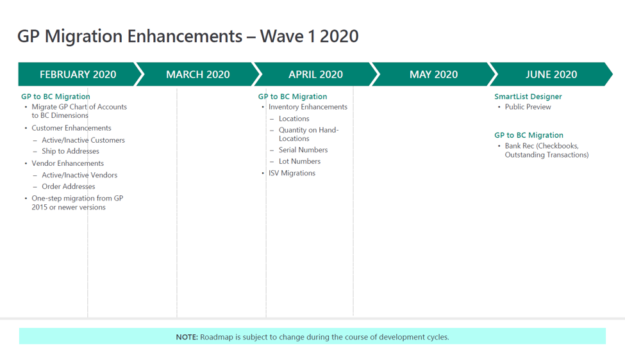 The next update to Business Central will be released sometime in February. There are a few confirmed features with more on the way in the major release in April. The February update is mostly focused on the actual migration tool enhancements that will bring additional functionality and integrations for customers who are switching accounting systems to Business Central. This update will include support for migrations between all currently supported versions of Dynamics GP and SQL Server. This means that Dynamics GP customers no longer have to upgrade if they’re already on Dynamics GP 2015 RTM or a more recent version, and they also won’t have to upgrade their SQL Server if they’re on 2012 or later. This cuts some of the cost and time associated with migrations because the version upgrading is no longer necessary.

This update also includes the ability to migrate the Chart of Accounts into a Business Central dimension and will allow a user to select existing segments to directly map to a global dimension or non-global dimension as needed. The update will also add the ability to choose whether to migrate inactive customers and vendors which will help clean up extra data that may not be important to bring to Business Central. Finally, it will bring over ship to addresses for customers as well as order addresses for vendors, which will assist a lot with billing and manufacturing. Look out for a detailed blog in February when the migration tool update is released with a full breakdown of new features.

What Data Can Be Migrated (And What’s Coming Now)

Microsoft is committed to adding more functionality to the migration tool so that it will one day be able to pull all information from a multitude of different systems. Currently, the tool can pull a wide variety of data including General Ledger accounts, current GL balances, customers, open Accounts Receivable, AR history, vendors, open Accounts Payable, AP history, items and quantity on hand, sales history, purchasing history, and inventory history. As stated before, the February update will allow Charts of Accounts to map directly into Business Central Dimensions. It will also allow for GL history to be pulled in, along with customer and vendor addresses.

There are still quite a few features that are in the process of being added to the tool and Microsoft is also constantly adding additional features to Business Central as more and more customers move over to it.

What Data Cannot Be Migrated (And What’s Coming Soon)

Since this tool is still in development, there are still a few limitations of the system that may prevent a potential user from making the switch to Business Central. Some of these are already on the roadmap for the next most recent update in April, though some are further out on the development side. For example, there is no current migration Dynamics GP manufacturing data.

In the April update, Microsoft will add the ability to bring across data from multiple warehouses. They will also be adding inventory costing layers and the history associated with those layers so that a user will not lose the information they already have on pricing of parts. This will allow for a better management of first in / first out procedures after the migration is complete. In addition, there will be a slew of other inventory enhancements including locations, quantity on hand at locations, serial numbers, and lot numbers, all of which help to catalog that inventory and maintain it as a migration is performed. In June, Microsoft will roll out its public preview for SmartList Designer for Business Central, and later this year, Microsoft will be adding the ability to bring over Bank Reconciliation information including checkbooks and outstanding transactions. Migration of open Purchase Orders and Fixed Assets are also on the roadmap for October.

The Future of Business Central Migrations 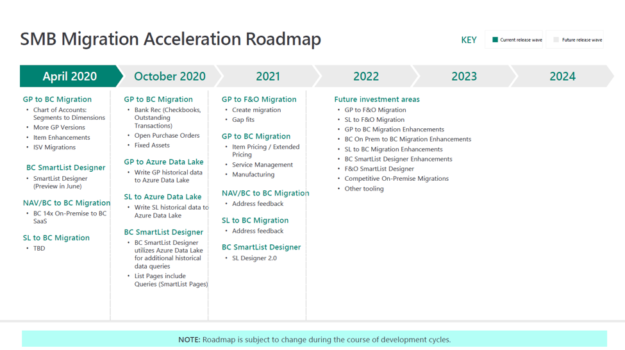