Last week Tensoft hosted a CPE eligible webinar on . Presented by Tensoft COO Dan Berube, this was one of the most popular sessions of . To get an idea of the webinar content, take a look at the partial transcription of the webinar below. You can view the full recording, including the . Then, if you’re interested in attending a future webcast, please let us know .

“This morning we’ll be going through some of the new features that Microsoft introduced into Business Central with the last major release. So, there will be a cadence of Microsoft release schedule where they will have major releases in the Fall and the Spring. So and then we expect another major release this spring between May and June timeframe, just before summer. For a complete list of the updates that were in the last release, I’ve put the link to the documentation in the PowerPoint which you can download. That will give you a full list of features and more details on the features that we are going to cover here this morning. 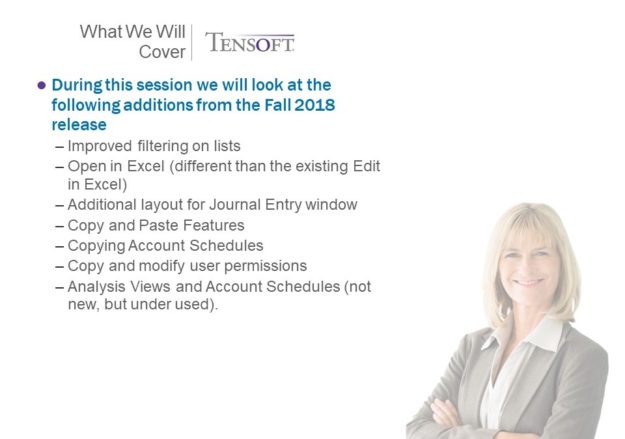 Microsoft has done a lot to manage the data within the system. So, couple things they have added to make data entry a little bit easier and things they have added to help find information as well as export that information out into things like excel or word. Also, we’ll be looking at some of the copy paste features that they have added in the last release. Some of the big request from the customers to Microsoft were that they had provided a lot of out of the box reports, but people always want to tweak those. In the release prior to this, we had to re-create those. We had to start from scratch and do them. Microsoft has now given us the ability to copy some of those core reports and start to modify them and make them our own. So, couple of things to help with the efficiency of getting somebody up and running as well as using some of the examples to start from and then letting users to expand and grow on top of those examples.

The last thing we are going to look at is not necessarily something that’s new but something that we have kind of seen not as utilized as I think it should be. So, part of it is that it takes a little getting used to from the reporting perspective but really one of the powerful features within Business central is the ability to and use those dimensions when you post transactions. It’s a great way to tag projects, departments, product lines. People come up with a lot of different pieces of information they want to collect and then it becomes how do we get that out, and what are our tools to be able to report on those, all that information we put into the system. And that last one over there - analysis views and account schedules - is going to show two kind of separate reporting tools that we can use together as a way to get that information out of the system. So, we will be doing that towards the end.”

Tensoft is a - sells, implements and supports it. For more information on Tensoft’s Dynamics 365 Business Central implementation and support plans, visit .

- By Caprice Murray, Tensoft, a