Earlier this month the GP team and I spent 3 days in Fargo, ND at . It’s the annual Dynamics GP extravaganza and, while it wasn’t exactly on my bucket list, I had more fun that I thought possible learning about accounting software. That’s why I wanted to share the three most significant things I learned.

This might seem obvious at a conference dedicated to Dynamics GP, but there was some doubt about the future of Dynamics GP since Microsoft . Dynamics 365 is being positioned as a stepping stone from entry-level accounting software (like QuickBooks) and is built on Dynamics NAV, rather than GP. That caused some concern, since GP had traditionally been positioned in that same niche, but they were adamant that Dynamics 365 launching doesn’t mean the end of Dynamics GP.

However, it will be returning to a one-per-year update cycle. Over the last 2 years Microsoft had been pushing biannual updates, but the feedback from partners was that it was too difficult to keep pace with that cadence.

Azure is Microsoft’s . Dynamics GP has traditionally been an on-premises solution. However, over the last few years there’s been a big push to start offering Dynamics GP hosted on Azure. On its own, this isn’t news, plenty of sessions made it clear it’s here to stay.

There were sessions on deploying Dynamics GP on Azure, partner showcases that showed it could be done in five minutes and plenty of partners offering hosting services. The focus was definitely on the fact that the market is ready for Dynamics GP on Azure. 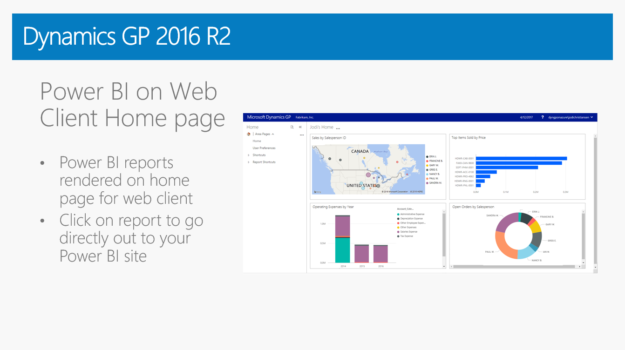 On the reporting front, there were two big trends at reIMAGINE 2016. The first was the expansion of PowerBI integration with Dynamics GP. (See the screenshot above.) The second was the expanded presence of . Between the two of them, they had seven sessions dedicated to new (or newish) Dynamics GP reporting options.

PowerBI is a Microsoft product that’s part of Office 365. It’s a Business Intelligence tool that ties into GP and other Dynamics applications (like Dynamics CRM) and there’s a powerful free version available. However, there are limitations to how often you can refresh data, which limits its utility when dealing with real-time financial data.

Jet Reports, on the other hand, is billed as an excellent financial reporting tool that cribs some of the simplicity of PowerBI. They also recently launched a free version compatible with Dynamics GP, which explains their expended presence this year. We’ve still got some questions (particularly around multicurrency reporting) but we’ll be keeping an eye on it.

For more on the changes coming down the pipe for Dynamics GP 2016 R2 and beyond, check out !

- Cody Pierson, Marketing Manager at , your , and  provider in Central Canada.