SmartList Designer has now been introduced with Microsoft’s GP 2013 Service Pack 2.  As part of this release Microsoft has sold SmartList Builder to eOne Solutions who will continue to administer and licence the software.  As an alternate program Microsoft has now included a new tool called, “SmartList Designer” into their product package.

While the two products are quite similar in their functions and results, they differ quite a bit in how they operate to the extent of their abilities. 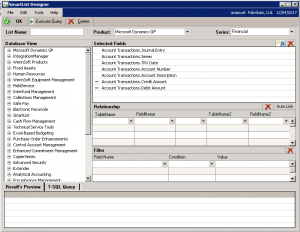 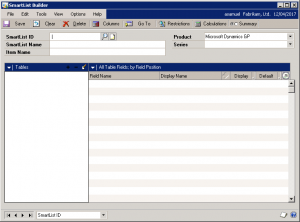 Both are similar in that they allow the user to create new SmartLists used to gather raw data from SQL tables.  Both programs also allow the user to add simple calculations their SmartList.  However that’s where the similarities end. 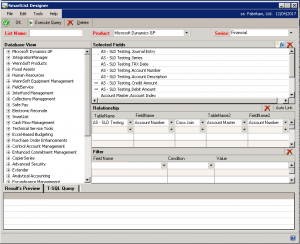 SmartList Designer, rather a very simplistic version of Builder, lets a user easily create new SmartLists within the GP program quite quickly.  Opening the tool can be done by clicking on “New” from the SmartList page.

By opening this tool on a desired SmartList, Designer allows the user to link a new table, select the columns to include, and create a new SmartList. 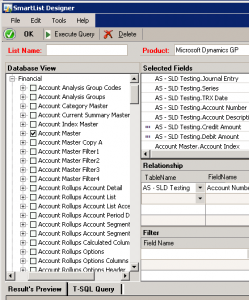 Another new feature added is a program is to allow the user to preview the results before actually creating the new list.

Similar to SmartList Builder, Designer allows the user to create calculations based on Table Fields.  However these calculations are limited to their extent.

All in all, this tool is quite useful for creating new SmartLists.  It seems a bit easier to use for beginners, but if you require extended calculations or a greater access to your design SmartList Builder is still a better option to use.