In my opinion, SmartList is the greatest ad-hoc reporting and inquiry tool available in . Its immediate access to users, ability to select multiple columns of data, and filter any number of ways goes beyond applause. SmartLists are also an amazing dataset for advanced reporting. Taking advantage of the ability to export to Excel, powerful Pivot Tables and Charts can be made easily off of the datasets. However, the major issue with this popular routine is that SmartList and the export to Excel can be somewhat slow. The performance behind this is usually acceptable for several hundred rows of data but when rows can quickly reach into the thousands in some environments, rendering the SmartList and exporting can become quite the waiting game. Enter our new friend, refreshable Excel reports!

If most of the SmartLists you run end up being exported to Excel reports, you may want to visit the deployment and use of the . As of Microsoft Dynamics GP version 2010 R2, the system comes with more than 200 pre-defined refreshable Excel reports that are exponentially faster than using SmartLists and then exporting to Excel. The refreshable Excel reports also have the ability to be updated automatically when the file is opened, or manually by the user. This can add up to a significant time savings if routinely running the same SmartList and exporting to Excel to retrieve the same data that may be available in a standard refreshable Excel Report. 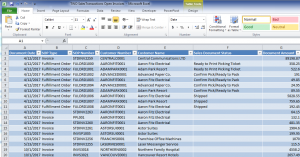 By The Resource Group, Microsoft Dynamics Partner in Washington